By now, we are well aware of what Animation ​basically ​means. Now it is the time to know what potential the Animation Industry ​holds in India as well as in the rest of the world.

Creating motion graphics is all about bringing out one’s imagination on the screen; therefore, this field has a lot of potential for talented people of the country. The future of the animation industry in India can be seen as a bright one as it has become a medium of providing employment to many 2-D as well as 3-D animators. This growth is going to be further fuelled by the outsourcing of animation project work by some of West’s animation giants to India.

Technology is growing its leaps and bounds in the industry. These days, computer-generated images have become normal against the time in the past where the frame-by-frame technique was largely used. Also, in India, the studios have become more advanced in terms of crafting visuals in 2D as well as 3D.

For entertainment, Hollywood produces a number of animated films throughout the year and almost all are convincing at their best. These movies go on to earn accolades as well as various awards in the particular category which gives a ray of hope for others to earn recognition at a global level.

The pros and cons of using animation in various fields are mentioned in brief as under:

★ Entertainment:
○ Just imagine the static characters comes to life and engaging with the end user and in a way gaining their attention. The best example can be that of cartoons &/or animated movies that kids, as well as adults, watch with much awe.

★ Education:
○ In contrast to using 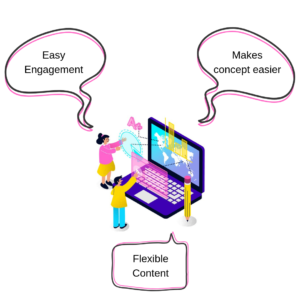 static images and books, videos make it simpler, more vivid, engaging and easy for the learners to comprehend.  Well-designed animated modules may help students learn faster and easier. Animation also helps in explaining tougher topics by showing images and processed that otherwise require only the imagination of the learner.

○ It may not be as effective as it is supposed to be if the target audience cannot comprehend the information properly. It has to be made sure that the language used is a lucid and lay-man language for everybody to easily understand.

○ If not all, some of the real-life learning may be lost in it. Since animation is a recreation, it may not depict the actuality of a video.

When we meet the next time, we shall discuss the pros as well as cons of the use of audio-visual content in various industries in much detail.